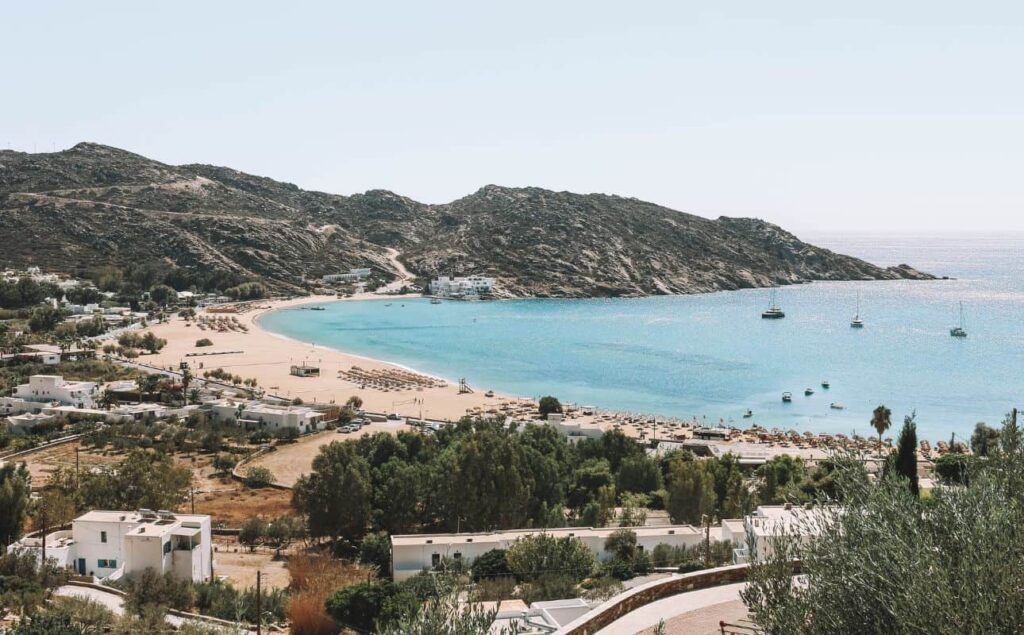 Ios is one of the most beautiful islands in the world and it has some of the best beaches. You can find this island halfway between Naxos and Santorini. Its area is approximately 109.024 square kilometers and it is home to about 2,024 people.

Mylopotas Beach is one of the best beaches in Ios. This pristine beach is located on the gulf side of the island. It is surrounded by low vegetation and has golden beige sand. The water is crystal clear and often calm. There are no jellyfish or sharks, making it a great place for snorkeling.

Mylopotas Beach is located about 3 kilometers from the town of Chora. The long, sandy beach is surrounded by hotels and cafes. This beach is popular with families because it is not crowded and offers an abundance of water activities for children.

The sandy beaches of Mylopotas are some of the most popular on Ios. You can swim and snorkel here, or play volleyball in the shallow waters.

You’ve probably heard of Ormos Beach and wondered why it’s considered one of the best beaches in Ios. Both are on the island of Ios, near the town of Chora. Though many of the visitors call these two places the same, they are actually two separate beaches. The port in Chora is also called Ormos, and although it’s a bit smaller, it still has a lot to offer. There are fishing boats moored just off the shore, and a church. Previously, the island’s Camping was located near the port.

Another great option for beach lovers in Ios is Tzamaria, a small bay located three kilometers from Chora and just 10 minutes’ walk from Ormos. While it’s not ideal for swimming, Tzamaria is a great spot for snorkelling and scuba diving. However, you’ll need to bring along a mask and swimsuit if you plan to go here. This is a smaller beach that doesn’t offer as much as Ormos, so you’ll need to pack accordingly.

Located in the south of the island, Manganari Beach is one of the most beautiful beaches on the Greek island of Ios. It is a double-fronted, long beach with fine, yellow sand and shallow blue water. Its location and natural beauty make it one of the most popular destinations in the island.

There are over twenty different beaches on the island, and most are easily accessible by car. However, there are some more remote areas that require a little bit of hiking or driving on poorly maintained dirt roads. For this reason, we recommend that you book a sunbed in advance and make arrangements for transport from the Ios Port.

Getting to Manganari Beach is relatively easy. From the village of Ios Chora, the road to the beach is fully paved. There is also parking near the beach. The trip to the beach takes about fifteen minutes.

Never Bay is an unspoilt, secluded beach, ideal for swimming, snorkeling, and cliff jumping. It’s the perfect place for a private beach party, but if you’re not into parties, you’ll probably just want to enjoy the turquoise waters of the bay without anyone else. Getting to Never Bay is easy: take a four-hour cruise to the island, then follow the signs to the beach.

There are many other beaches on the island, but none are as secluded as Never Bay. The eastern coast of the island is home to several beaches, many of which have received Blue Flag recognition for their environmental qualities. It’s also home to the island’s 17th century Church of Agia Irini, or Saint Irene. Just past the church, you can reach a secluded beach by following a pathway.

The island’s party season lasts for about two months from mid-June to mid-August, but after that, the atmosphere is more laidback. When I visited the island in June, it was not too crowded, and the weather was not too hot. Another good month to visit Ios is early September or early October. Before the winter arrives, many of the bars and restaurants close down for the winter.