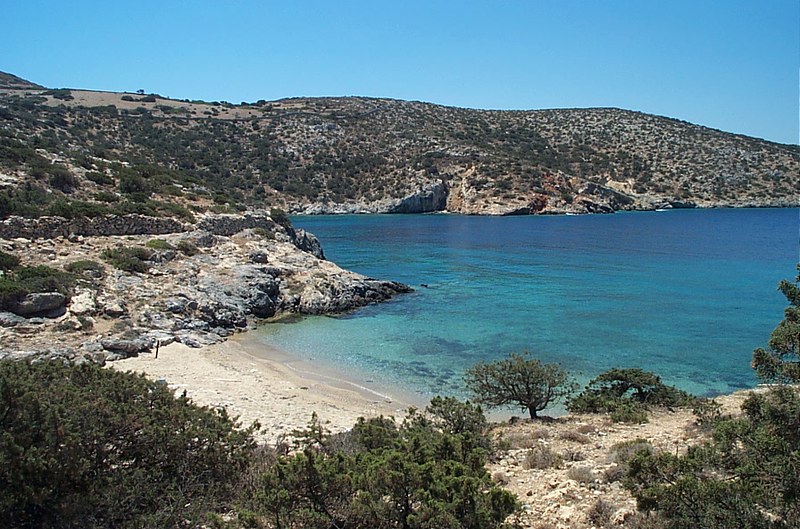 Schinoussa is a small island in the small Cyclades group. The closest other islands are Naxos, Irakleia, Koufonisia and Keros. The island has 2 villages Chora and Messaria and a port Mersini.

If you’re planning a vacation to the Cyclades, you might be wondering what you should do in Schoinoussa. Today, it is part of the municipality of Naxos and the Lesser Islands. If you’re looking for things to do in Schinoussa, you’ll want to read on to find out what you can do on this picturesque island.

The population of the island is about 250 permanent inhabitants.

How to get there

Direct from Piraeus, Naxos, Paros and Iraklia 3 times per week.

Every day except Sundays from Naxos, Iraklia, Koufonissi and Amorgos. Also from Donoussa 3 times per week.

To connect with ferries going to other islands it would be best to take a ferry to/from Naxos which is a 2 hour trip.

Things to see in Schinoussa

The castle provides a panoramic view of the Aegean and its surroundings. Among its attractions are the Cave of Maniatis, also known as the Pirate Cave, the windmills of Schinoussa (which are no longer in use), the windmills of Tsigouri, and the cave of the Pirates.

The history of the Castle of Schinoussa can be traced back to the sixteenth century, when it was constructed in the center of a picturesque Cyclades village. The area was surrounded by orchards and vineyards and was once a centre of pirate raiding. The ruins of an early christian basilica can be seen in the surrounding area. The castle is situated in the Fountana region, and offers beautiful panoramic views of the Aegean.

The island was inhabited since ancient times and a large collection of pottery and small statues reveal great activity in the 10th century BC. In the medieval period, the island was ruled by the Venetians and was a centre of trade. In the 17th century, the Ottoman Empire used the island for pirate shelter and the local population began to move to Schinoussa. The castle is a great place to visit to see its rich history and discover the many treasures that this beautiful place has to offer.

The island was settled since ancient times and has a rich heritage of culture. The largest settlement, Chora, is located 1200 meters from the harbor. Because it’s high on a mountain, the town cannot be seen from the sea. In prehistoric times, this island was a popular target for pirate raids. Because of its remote location, the residents of Schinoussa built their homes on a hilltop with a view of the sea and could take precautions against approaching ships.

The Chapel of Evangelismos

The Church of Evangelismos is one of the most charming chapels in Schinoussa, and is located in the village of Messaria. Its ruins of an ancient Venetian castle can be seen in the church. Located in the village of Panagia, the Church of Panagia Akathi is the most important religious center. Its icon of the Virgin Mary Akathi is one of the most valuable and beautiful icons on the island. In addition to being a beautiful church, the island also hosts the biggest religious celebrations.

The Church of Panagia Akathi

The Church of Panagia Akathi is the island’s religious center. The church was built in the typical Cyclades style, and contains a valuable icon of the Virgin Mary Akathi. The church is located in the quaint village of Panagia, and hosts one of the largest religious celebrations in the island. It also serves as a popular place for weddings and anniversaries.

The Folklore Museum of Schinoussa

The Folklore Museum of Schinoussia is one of the most important museums in the region. It is located in the capital village of the island. The exhibits are made up of everyday objects used by people from different generations. Visitors can enjoy a variety of local products, including cheese, wine, and honey. The museum also offers the chance to learn more about the island’s unique culture.

The Windmills of Schinoussa are a symbol of the island, and they are located in the picturesque village of Chora. The windmills are situated at 90 degrees angles, and were used to power the island’s old water mills. While these windmills are not in operation today, they remain a fascinating sight. The villages of Messaria, Tsigouri and Vargies all have one of these beautiful structures.

Things to do in Schinoussa

Iraklia is only a 20-40 minute trip from Schinoussa. You can hire a local boat to take you to Iraklia for the day and then return in the afternoon. Another option is the ferry service Aeolia which operates every day in July and August. This boat is available for hire at other times. On such a small island things change a bit and its best to ask at the time the best way to go to Iraklia.

There are 18 beaches on the island which are generally very beautiful. On such a small island with that many beaches you will not have to share the beach with thousands of tourists.

Schinoussa does not have the beach party atmosphere of many of the other islands. Schinoussa is better for the type of person who wants to find a beautiful deserted beach rather than it heaving with people and music.

You may want to take an umbrella or a beach tent or you may risk a bad case of sunburn. Some of the beaches have trees nearby for shade. Also you may need to take your own drink and food to the more remote beaches or if you are visiting off season when some tavernas may not be open.

Tsigouri Beach is the most popular beach and also the closest to the village. There are numerous trees near the 350 metre beachfront. There is also a beach bar and a taverna at the beach.

Psili Ammos beach is a small sandy beach 2 km from the village of Chora. The beach is accessible by road and is known for its clear water. There is also a taverna nearby.

Livadi Beach is 2 km south of Chora and there are a few trees nearby that provide some shade and a taverna for refreshments and food.

Lioliou beach is a sandy beach that is 4km from Chora. The beach is quite secluded. There is a tavern which is open during the tourist season and trees for a bit of shade.

Mersini Beach is adjacent to the village of Mersini so there is a greater chance that there maybe other people at this beach.

Deli is a Greek/Seafood restaurant in the village and has a great views over the water. Some say that this the best restaurant on the island and with a price to match.

Restaurant Harama is a Greek/Mediterranean family restaurants that has really good reviews on TripAdvisor.

Captain Cook Restaurant is a Greek Seafood Restaurant overlooking Tsigouri Beach. Not sure if there is an Australian connection there.

The best hotels in Schinoussa are located in the heart of the town, surrounded by lush greenery. All rooms have a flat-screen TV, a kitchenette, and free WiFi. The restaurant offers traditional recipes and local wine. Guests can also enjoy diving activities. A 24-hour front desk can arrange a shuttle to the nearby port. In addition, the property has free on-site parking.

Choosing the right hotel can be tough, but there are some great options. Ailouros Summer Hotel is a beautiful, luxurious hotel with rooms that are cozy and surrounded by a lush natural landscape. The Theasis Luxury Suites offers luxury accommodation on the beachfront.

The Agnadema Schinoussa provides free parking and an outdoor swimming pool. Each room comes with a kitchenette and access to a terrace with a beautiful view. The Agnadema offers free shuttle service to the beach and a free pick-up and drop-off service. For those on a budget, the Pension Galini is a good choice. It offers air conditioning and a restaurant.

There are many great hotels in Schinoussa. You can choose from the best boutique hotels or basic rooms. You can even rent a private apartment and have a wonderful view of the island. You can get a complimentary breakfast at the Archipelagos Boutique Hotel. The hotel also has free WiFi. It is a great option if you’re looking for a family hotel with a spa.

The Archipelagos Boutique Hotel is a great place to stay in Schinoussa. It is located in the picturesque gulf of the town. It is a 5-minute walk from the beach and the village. It is a popular choice amongst tourists and is close to Tsigouri, which is a famous beach town. The restaurant serves Greek cuisine and offers free WiFi. During the day, the Agnadema offers breakfast, as well as free parking and a restaurant.

The Schinoza Luxury Suites are situated on a hill overlooking the Aegean sea. The views from the Schinoza Luxury Suites are amazing. Guests will love their private balconies, patio, and private bathroom. The island’s 18 beaches are perfect for families. If you’re looking for an exclusive vacation, this is the perfect spot. If you’re looking for a romantic holiday in Greece, a luxurious villa or a comfortable bed will be the perfect choice.

In 2012 Forbes Magazine voted Schinoussa as one of the six places in Greece that you should visit.